the invisible artist (who is an artist, part deux)

the anonymity of the character is part (if not the most important part) of the street artist (turned film maker with the screening of his first “pseudo-documentary” at the Sundance festival) Banksy. where does the anonymity end and the branding begin (from street, fugitive art he has been transformed in a gallery sold artist) is another question. Banksy makes art with no official approval, even despite it, and he is sold, and famous for it. I wonder where would Banksy find himself in the planned – by the Romanian Union of Visual Artists – law to create an “official statute” of the artist to be confirmed by a committee or something as such. 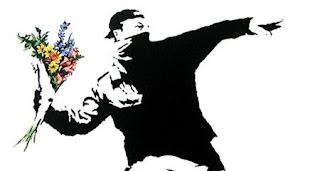 the database of art plundered by the nazi

"the romanian dream"= "a country as outside"

December 2, 2010
« Previous post
Art or the memory of it (1)
Next post »
the Romanian state artist today as yesterday